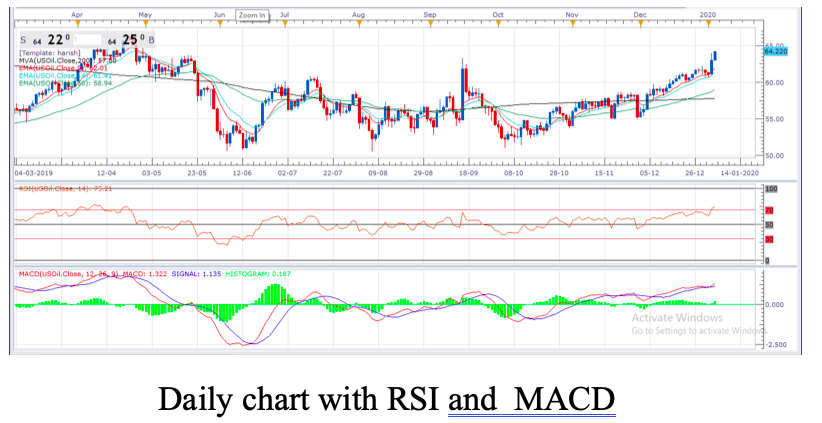 Overview: – Crude oil arrived at 7 month’s fresh high due to US- Middle East drama. Well from the beginning of the month we are witnessing a strong bullish momentum in the crude oil however earlier also the trend was up but now it has changed the gear and still heading north side due to fundamental factors. From past couple of weeks we are witnessing a bullish momentum in the crude oil, as it bounced from the $50 level with the formation of double bottom pattern and in this week it marked a high of $64.23 level.

In our previous report also we mentioned to buy the crude oil around $58 level for the target of $62 and $64 so we are expecting that our readers must have made profit from this move.

Fundamental Analysis:-  There are few factors due to which we may see further buying in the crude oil- 1. Saudis may be limiting oil exports to US. 2. Venezuela’s decline of oil production, too small to impact oil price. A military clash has become more likely in Iran.

Technical Analysis: – From technical prospective we can see that earlier crude oil was trading between a short term uptrend channel, where bulls were making successively higher highs n higher lows, but now bulls have come out from the channel and moving upside aggressively. Recently it breached a high of $63.33 level which is a strong key resistance level and it is trading and sustaining above the mentioned breakout level which indicates that further buying is still on the cards.   Overall pair is trading above all major n minor EMA lines. A daily closing above $65 level will open the way towards the $66.50 and $70 level in near term. RSI is already at above 70 line which is overbought territory so we may see some correction but this correction would be second opportunity to buy again.  The MACD indicator is also supporting the bulls with a bullish crossover on the MACD.

Trade idea:- Investors and traders are advised to buy the crude oil at current level $64 and for the target of $65.50 and $67 with the tight stop loss of below $60 on closing basis.