Copper:- Bulls are rocking and breaking all the heights 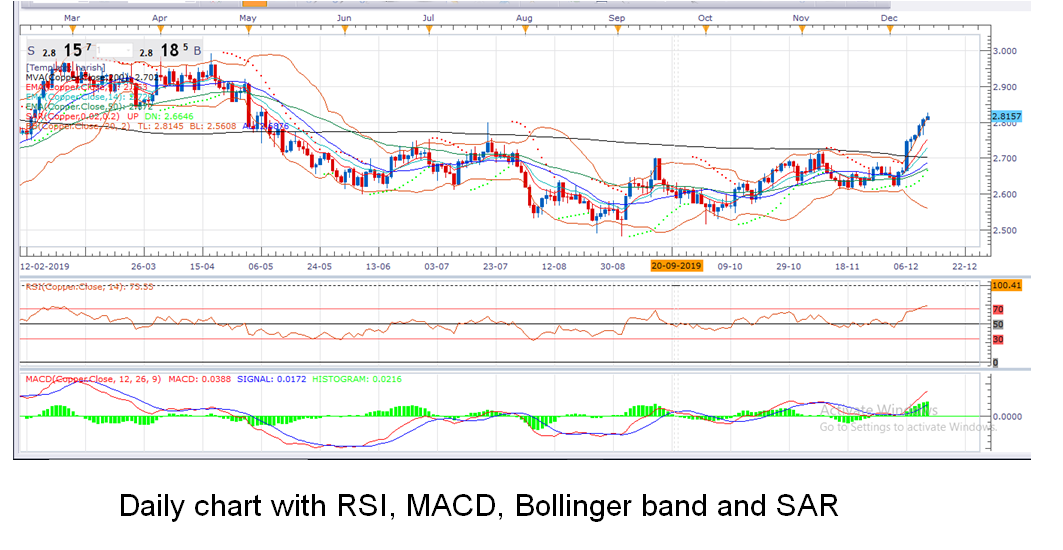 From the past couple of days we are witnessing strong buying in the copper where bulls are taking the charge and dominating the bears. Bulls took the pair from 2.600 levels to 2.814 levels which was a fantastic move from bull’s side. Overall pair is trading in an uptrend and buy on dips will be the profitable strategy. On the daily chart a pennant pattern along with a short rounding bottom pattern has been posted.

Well this week’s closing matter a lot for the upcoming sessions if bulls trades and sustains above 2.900 level then we may see buying till 3.000 level. Bulls are trading   above all the major and Minor EMA lines which creates further bullish sentiments for the week. Technically, a short term uptrend line (blue colour) has been posted with bullish marabuzo candlestick price pattern.

The Bollinger band is also expanding and showing bull’s strength as it has turned up and copper trading between the upper band and middle line, the current picture indicating a strong bounce on the chart. The parabolic SAR dots has occurred on the downside of the candles with RED dots is providing support to bulls and indicating further upside movement is on the cards.

Daily to weekly bias remains bullish on the copper and odds are in favor of bulls for the time being. A bullish crossover on the MACD indicator with zero line along with signal line crossover is also favoring the bulls. The RSI indicator is above 50 is also generating bullish signal. The 2.750 level is a key support level followed by a 2.700 level as major support level for the time being, on contrary 2.900 levels is a key resistance level followed by 3.000 levels as major key resistance level.