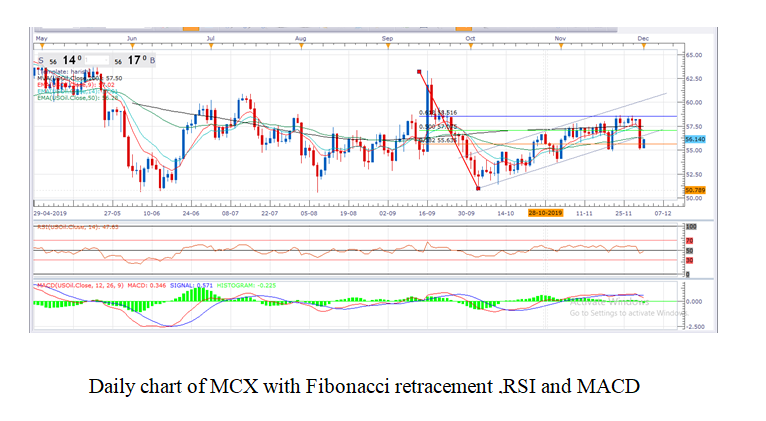 Overview: – By analyzing the daily technical chart we can see that crude oil was trading in the very narrow ranged uptrend channel and where bulls were leading in the game and they arrived at $58.70 level however after arriving at that level bulls denied to move up further due to which we have seen a rickshaw man doji candlestick on the daily chart after that we have seen 3 consecutive negative trading session and eventually on the weekly as well as monthly basis crude converted all the gains into losses. The last Friday was the black Friday for energy segment as both the commodity Crude Oil and NG had tumbled down and crude oil fell around 5%.

In our previous report also we mentioned to buy the crude oil at at current level $55  for the target of $57 and $58 with the tight stop loss of below $53 on closing basis and our both target has been achieved so we are expecting that our readers must have made handsome profit from this move.

Fundamental analysis: – The energy benchmark seems to have negatively affected by the sluggish demand outlook due to the US-China tussle. Though, traders are more concerned for the next week’s meeting of major oil producers in Vienna. OPEC are due to meet on December 5th in Vienna and it looks like there could be some fireworks. Crude oil tumbled down after supply disruption concerns mounted on news that the Prince Abdulaziz bin Salman who recently took over from Khalid Al-Falih may voice concerns over the current OPEC supply cut deal.It is said that Saudi Arabia will no longer compensate for other members non-compliance. it seems that Saudi Arabia will not pick up the slack left by other countries in the cartel.

Technical Analysis: – From technical prospective we can see that crude oil has given us downside breakout of the uptrend channel where earlier bulls were leading but now bears took the charge and a big bearish marabuzo candlestick on the last day of the week as well as month has spread the negative sentiments for the upcoming sessions. By applying the Fibonacci retracement line from previous top to bottom ($63 to $51) we may see that crude has retraced exactly 61.8% which is known as golden retracement and from here we have seen selling pressure at an initial stage and below $55 level we may see further selloff. Well the way bears have reacted aggressively it seems like we may see further bearish sessions in the coming week. Odds are in favor of bears and daily to weekly bias remains bearish on the crude oil. A bearish crossover on the MACD indicator is favoring the bears and a bearish divergence on the RSI is the leading indication for bearishness and it’s a recent development on the daily chart.