USD/JPY-Pair has given breakout of key resistance level 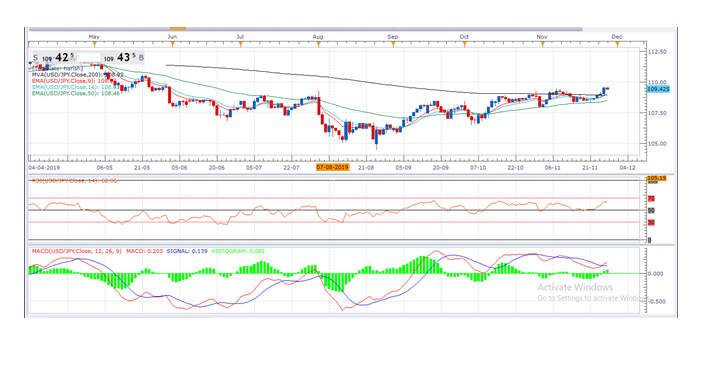 Overiview :-From past couple of days we are witnessing very narrow range move in the pair and the way pair is moving on it seems like tug of war is going on. Yesterday pair has given us bullish breakout of the narrow range and now pair is trading and moving above the key resistance level of 108 level. It has arrived at 2 and half month’s fresh high of 108.62 level and still sustaining above 108 level which is positive sign for bulls. Well 109 can be a stumble block for bulls which is a strong key resistance level where 200 SMA line is lying. Overall anyone can see that bulls are rocking and they are playing at front foot n the pair. Well presently pair is sustaining above the moving average line which is a good news for buyers.

Fundamental analysis: – The USD/JPY pair jumped to its November’s high, rallying in the US afternoon, following the release of solid US data indicating steady economic growth. Additionally, Wall Street remained in the green, and while indexes’ rallies were not too relevant, they flirted with all-time highs. Safe-haven assets remained out of the speculative radar, and even Treasury yields managed to post intraday gains.

Japan will release October Retail Trade during the upcoming Asian session, seen flat monthly basis and down by 4.4% when compared to a year earlier. Large Retailers’ Sales in the same month are expected to post a modest 1.2% advance after rising by 10% in the previous month.

Technical Analysis:- From technical prospective we can see that bulls are forming a rounding bottom pattern where very balanced demand and supply is going on and we are expecting it to arrive at 111 and 112 level in coming trading session. A daily closing above 110 level will open the way towards the 111 and 112 level. Well the way bulls are reacting it seems like bulls will arrive at this level in near term. . A bullish crossover on the MACD indicator is generating bullish signal and RSI is also favoring the bulls for the time being. Presently pair is trading above all the major and minor EMA lines which is providing strenght to the bulls.

What next:- Odds are in favor of bulls. Intraday bias remains bullish on the pair as long as 108.50 level remains intact. A daily closing above 110 level will open the way towards 111.50 level and furthermore in near term