Crude Oil: Tug of war is going on; let’s see who wins the game 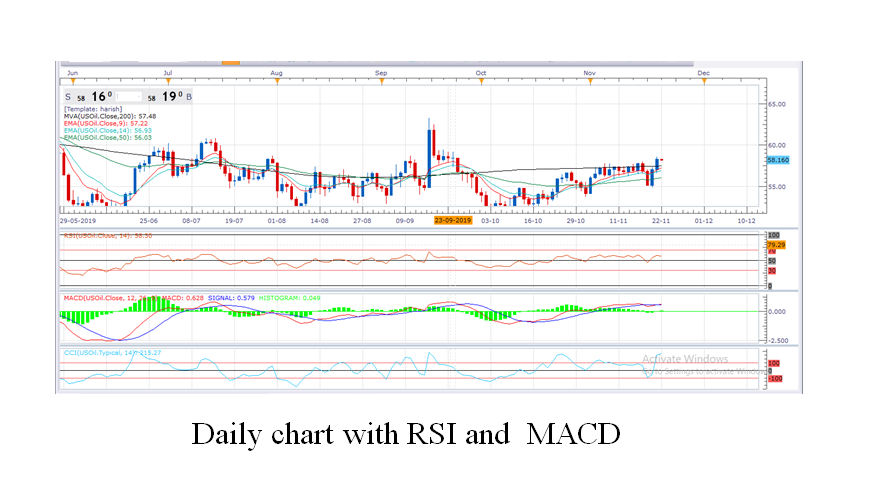 Overview: – In the last week we have witnessed that bears were doing so well at lower levels and they took the black gold at $55 and even during the a bearish marabuzo candlestick below the moving average line was posted on the chart but recently we have seen a bullish turnaround which countered all the bearish sentiments and a bullish engulfing candlestick has been posted day before yesterday.  Now we can say that tug of war is going on between bulls and bears and it is very tuff to say anything for the time being.

Technical Analysis: – From technical prospective we can see that crude oil has received strong demand pressure from the last two consecutive days and from $55 level. The bullish engulfing candlestick followed by bullish marabuzo candlestick has been posted on the daily chart which is providing us bullish signal and today’s closing matters a lot.

We need one more candle which should close above $59.00 level that will open the way towards the $62. Presently crude oil is trading above minor EMA lines and major EMA lines. The RSI is already at above 50 line which is favoring the bulls.  The MACD indicator is also supporting the bulls with a bullish crossover on the MACD.

What next:- Odds are in favor of bulls and intraday to weekly bias remains bullish on the crude oil as long as $55 level remains intact. The $60 level is immediate resistance level followed by $61.00 whereas $55.00 level is strong key support level followed by $54 level.

Trade idea:- Investors and traders are advised to buy the crude oil at current level $58 and for the target of $60 and $62 with the tight stop loss of below $55 on closing basis.